Time out in the Shed: a cup of Tea with Ian Dicks, aka Dixie, our Artist of the Week

We had a virtual cup of tea with Dixie, our Artist of the Week, to find out a bit more about his work and how he came to it. See previous blog posts (below) for more of his latest work - we're pretty sure you'll love it!


What first drew you to Illustration?
If you'd have asked my mother she would have told you of the hours I would spend sitting in my high chair drawing and painting, so I guess that's when it all started, though it wasn't until much later that I realised that people would pay good money for me to do this.
What is your favourite illustrative memory, and why?
I expect my important memory was my first commission.
I had recently been ejected from my job in advertising and in a sink or swim situation I switched from graphic designer to illustrator. Armed with a hastily cobbled together portfolio I visited the Radio Times; in those days situated in a homely building in Marylebone Lane with a moustachioed uniformed doorman. Blessed with the naivety of youth I swanned confidently into the artroom only to be ticked off for a set of non-politically correct Uncle Tom-style caricatures I'd done. Chastened, I was nevertheless given a drawing for one of the regional pages. The regionals were a great place to try illustrators out as only the inhabitants of Scunthorpe or Newquay ever saw them...The job that would years later have taken 30mins took a weekend of angst. Looking at it now I'm amazed it was published but it was instrumental in launching me into a career I never dreamed I'd follow and which has fed and clothed me for 30 years.

When I first began working as an illustrator I used layout pad, pen and ink and concentrated American Doc Martin (no relation to the boots) watercolour inks favoured by airbrush artists. Wonderful colours but incredibly fugitive. My nibs came from the last specialist nib seller Mr Poole in Covent Garden . If you think a nib is nib is a nib you would have thought again...there were left handed nibs, gilt nibs, fluted nibs, a cornucopia. The nibs I used and still use ..were 'ball pointed' nibs that didn't dig in the paper which came in beautifully decorated gross boxes marked 'as supplied to The Empire'.
I'm digital now though I still draw on paper but scan into the computer and colour using a stylus and digital tablet I would never have thought in a million years that I would end up an illustrator and an exponent of the computer. Funny old world.
Who is your favourite illustrator, and why?
R O Blechman a very famous cartoonist who worked for the New Yorker in the 50's and sixties he produced wonderful visual ideas with incredible economy of line. Something I've always tried to emulate. 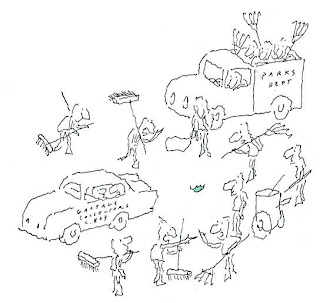 What would be your ideal drawing tool?
A tool that I'd love to try is a A2 touch sensitive drawing tablet which means you can draw straight onto the screen as with the ipad. Alas too expensive to buy on a whim. 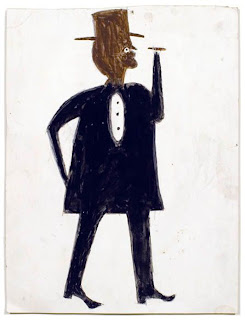 Tell us what you enjoy most about your own work, and what has inspired you recently.
I love conveying ideas and information simply and succinctly; as a result I developed a parallel style working as Ian Chamberlain. Drawing about 10mm high and enlarging it several hundred percent means that anything unnecessary is omitted . My most recent piece is for a London Transport poster competition for which I've just been short-listed.

Do you have bursts of creativity - and when/where are you most creative?
Being an illustrator there's no time to sit around waiting for the muse, a looming deadline concentrates the mind incredibly.
Tell us about your favourite photograph, either your own or someone else's, and please send us a copy if you have one!
Years ago an American gallery owner found a black guy called Bill Traylor sitting on a dusty sidewalk drawing feverishly with anything that came to hand. Although naïve and crude his work has a freshness and vivacity that usually eludes 'trained artists'.


- Thanks Ian - it's great to hear more about how you came to your craft, and your experiences of the industry.


To see more of Ian's work, have a look at his Shed Profile, and follow him on Twitter @Cartoonist_No1. He also has two websites - one of his own work, and one to help people explore Dorset's Jurassic Coast - www.dorsetdorset.co.uk
Posted by Shed Photography at 14:03

Shed Photography
We've met so many talented people who don't have a showcase for their work and don't have time to promote or exhibit it. People who take amazing images but wouldn't call themselves photographers or artists, who have no representation, can't afford a website, or don't have time for a blog. We've experienced all of this, so have come up with the following idea: you have your own page within our website and we do it all for you. What we need from you is: a 200 word biography (please embellish at will!), a portrait photo and 12 images - we all have some amazing images or know somebody who does. The difference between The Shed and other websites is that we are focussed on promoting and developing your art. Our website acts as an online image bank, an affordable gallery and shop and will also put you in touch with commissions through our search engine by country, region or town, with links to your existing website or blog. We'll also have regular exhibitions of our 'artists' - take a look at our newsletter and blog for the latest.