Carrying on from our previous Artists of the Week I have picked out several images which I really like in The Shed. We are lucky to have such a diverse range of artwork and photographic imagery to choose from but after a long debate I have managed to whittle my pick down to five.
1 Architectural Comp 1 by Massimiliano Maddelena 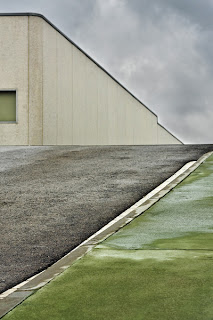 This is a wonderfully composed image with subtle colouring and an interesting sky. I like the small part of the window on the left which initially gives the impression that someone is keeping watch over the scene but after close scrutiny appears blank which adds to the mystery. Strong diagonals give the image its strength.
2 Cobb Steps by Chelsea Davine 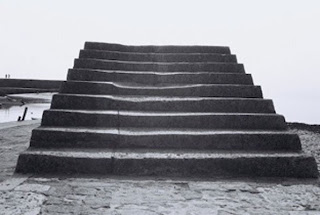 I have walked up and down these steps numerous times both before and after those awful steel structures were put in place. Never did I consider that there was such a strong image staring me in the eye. The simplicity of the Chelsea’s monochrome image tells us all we need to know – the steps themselves. We are invited up the well worn steps but are not given an opportunity to see where they lead to – we have to use our imagination as to what we will find at the top. We are however given a small hint by the tiny figures in the distance that there might be a way through. A wonderfully composed simple image which looks fantastic when printed large onto aluminium.
3 Not tonight love I have a splitting headache by Matt Sowter 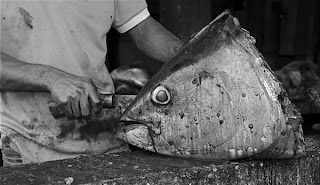 This is probably not the type of photograph that most people would put on their wall but this gruesome scene has been well composed and being in monochrome gives it great impact. The fish’s eye is a strong element in the composition and appears to be without emotion despite the fish having been dismembered.
4 Mural Shadow by Jess Douglas

An artwork rather than a photographic image. I do love all of Jess’ graphic images with the detailed drawing of the buildings and adverts coupled with the very subtle colour wash. As Addidas are designing and sponsoring all our athlete’s clothing for the Olympics I am sure they would be interested in this image.
5 Vanishing point by Guy Kirkham 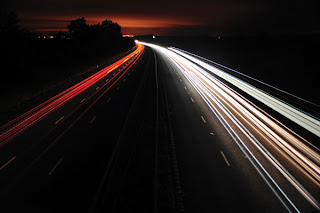 A very simple image of a road at dusk/dawn showing light trails from vehicles passing by. This has been done many times before but this image works especially well because the lights are coming/going around a slight bend which then leads us to a tiny glimmer of light in the sky. I find it intriguing that there appears to be more vehicles coming towards us than going away and why no one is using the carriageway in the middle.


To see Andy's own work please visit his Shed Profile. And to buy his, and any of the images seen here, please visit our online Shed Shop!
Posted by Shed Photography at 15:03

Shed Photography
We've met so many talented people who don't have a showcase for their work and don't have time to promote or exhibit it. People who take amazing images but wouldn't call themselves photographers or artists, who have no representation, can't afford a website, or don't have time for a blog. We've experienced all of this, so have come up with the following idea: you have your own page within our website and we do it all for you. What we need from you is: a 200 word biography (please embellish at will!), a portrait photo and 12 images - we all have some amazing images or know somebody who does. The difference between The Shed and other websites is that we are focussed on promoting and developing your art. Our website acts as an online image bank, an affordable gallery and shop and will also put you in touch with commissions through our search engine by country, region or town, with links to your existing website or blog. We'll also have regular exhibitions of our 'artists' - take a look at our newsletter and blog for the latest.